A while ago I wrote about Automatic Duplicate Image Shadow and used indiepen for showing the result of my efforts.

indiepen is a solution for showing code samples without the need of a code sharing platform, like codepen. Just reference a index.html, main.js and styles.css from wherever you want and indiepen is wrapping it with a neat viewer inside an IFrame.

I did it quick and dirty first (sample files in a static folder) and now it was the time to do it right: place the sample files in a subfolder of the post in my Hexo-driven blog solution, in order to reference it from there AND have the possibility to call it directly via ./post/my-post/sample.

The key to achive that in Hexo is the configuration option post_asset_folder: true, which generates a subfolder for all assets with the same name as the post.

My idea regarding the indiepen files was having a subfolder for each indiepen in the post asset folder:

Run hexo generate, check that the indiepen was showing up properly and I thought I was done. Wrong … after commiting my changes to Github, where my blog is living, and checking my RSS feed a while after, I saw this: 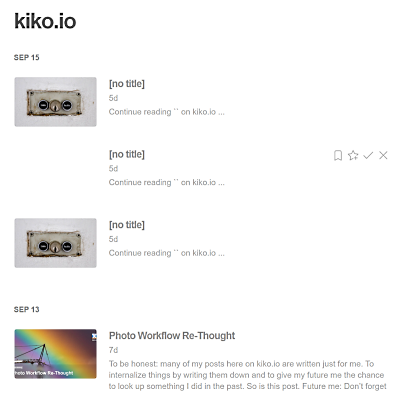 The indiepen files in the asset subfolder were treated like posts by Hexo by no obvious reason! A short research on the web lead me to a Github issue called asset files were rendered when post_asset_folder set to true from 2015, with several requests to fix the bug.

Since I’m little familiar with Hexo’s processors, I saw two ways to fix the problem:

After a little searching around in Hexo’s source code, I was able to identify the location where the problem was. In the post processor:

In the very beginning of processing posts, the code iterates over all files and folders in the _posts folder and creates a param object for each by using the pattern. This object has an attribute named renderable, which is used by the process method later on, to decide if it has to be rendered or not.

But … the determination of renderable is based solely on wether a file has a renderer (isRenderable) or if it is listed in the skip_render configuration. See line 24 in the sample code. As HTML, JS and CSS files naturally have a renderer in Hexo, they will treated as posts!

Alleviation Of The Problem

In this early stage of code execution, only files and folders are listed. There is no reference to a post or something like that, in order to find out if a certain file belongs to a post as an asset. Examination of the path will fail, because it is possible in Hexo to have a folder hierarchy under _posts.

The only way to approach the problem solution is by making assumptions:

Important here is, that it is not an option to hide the files in some way, because then they won’t appear in the website. They have to be marked as process it, but don’t render it, by bending the renderable attribute.

These considerations led to a small extension of the above code below line 24:

This is what I pushed as a Pull Request to the Hexo team today. I know, it not ideal, but maybe they accept my approach and ship the fix with the next version.

404 Page in Hexo for GitHub Pages

Provide an error page automatically when resource not found

Part Two of having fun with Hexo and GitHub Pages