Those who have a Google account usually also use the web-based mailer Gmail, often Google Calendar for appointments and perhaps Google Drive for storing files in the cloud. The US internet company makes it very easy for users to use its web-based services. The entry barriers are low and the interfaces are tidy and intuitive.

If you use the in-house Chrome browser, you can also be informed about incoming mails or upcoming appointments. One click and the browser opens with Gmail or Google Calendar …

But it is not always necessary or desirable to load one of the Google tools completely in a new browser window, when you may already have two or three dozen tabs open in several windows and are in danger of losing track of them.

That’s what Montreal-based software developer Jason Savard seems to have thought ten years ago. At that time, he began writing a Chrome extension that would report a newly received Gmail by means of a small icon in the extension bar of the browser and display it directly in a separate pop-up window by clicking on it. The result was Checker Plus for Gmail.

In addition to the extension for Gmail, Savard offers others for Calendar and Drive and all of them have one thing in common: You can do the most important functions of the services directly in the popup that opens: Reply to mail, write new mail, create appointment with reminder, upload file, get file link to share - Everything works without having to load the services’ interfaces in a browser window.

For the author and probably some of the almost 2 million users, the Checker Plus extensions are the kind of tools you can’t imagine working without them - that’s how quickly you get used to the functionality and adapt your own workflow to it.

Checker Plus for Gmail: Impressive range of functions

If you click on the icon, a pop-up opens with a clear list of all accounts and the unread mails. The mails are displayed in compact mode, i.e. in addition to the sender and the subject, you also see an excerpt from the mail text.

If you now click on a mail, it is displayed in full in the popout and also takes any mail thread into account. The icon buttons Archive, Mark Spam, Delete, Mark Read and Mark, which are displayed when hovering over a mail, represent the most frequently used actions and usually make it unnecessary to use the Open in Gmail button. 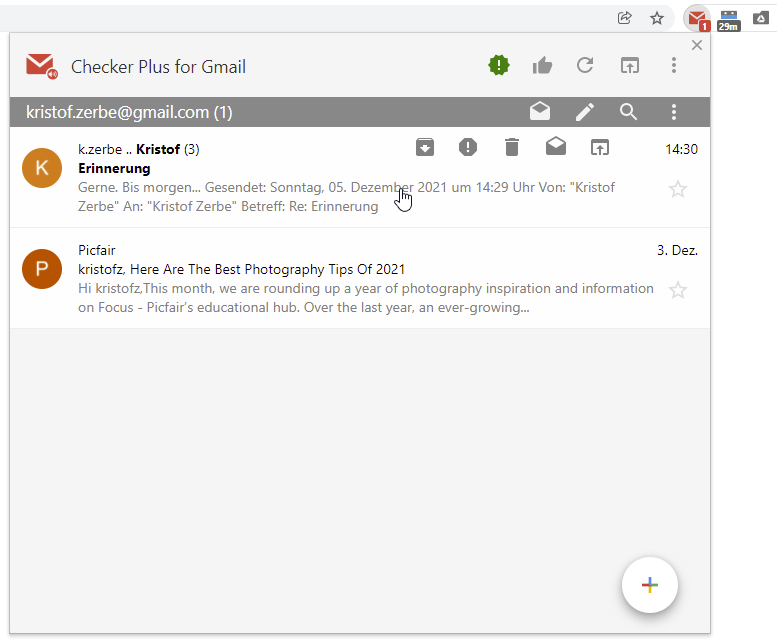 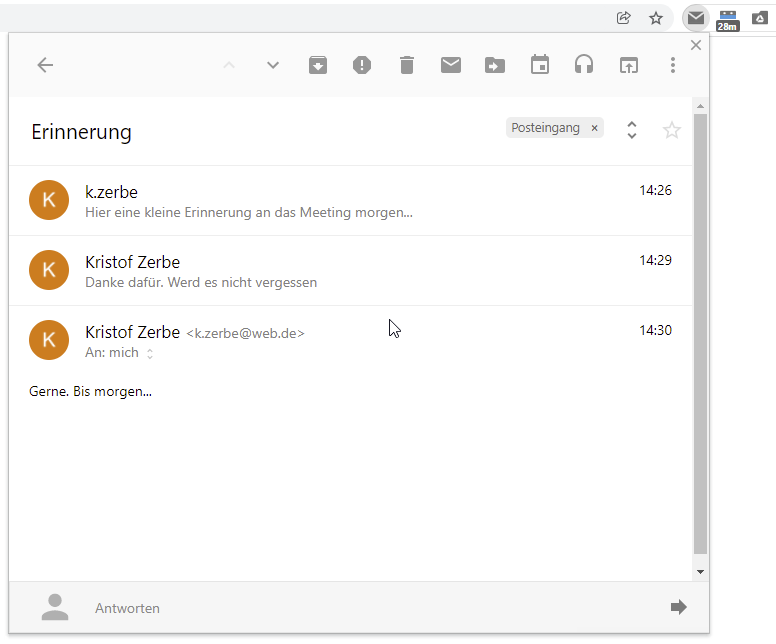 Over the years and with each new version (currently v22.9), countless options have been added, so that Savard had to divide them into nine groups, including the start page:

It would be foolish, to go into all the settings in this article, but a few deserve an extra portion of attention, such as those under Accounts/Labels. Here, users can decide whether the extension should determine the available Gmail accounts itself based on the login to Gmail saved in the browser or whether they should specify them manually. In both cases, it is then possible to select only certain labels for the notifications or to leave it at the standard inbox. This is very usefull if you have set up a system of automatic distribution to subfolders (labels).

Since the extensions also control the interactive desktop notifications, it is useful to be able to define periods of time under Do Not Disturb, when this is not to happen. In addition to the option of using dates from the Google Calendar, you can also define weekly schedules for this purpose.

Checker Plus for Google Calendar: Better than the original

The icon of the Chrome extension for Google Calendar visually warns of upcoming appointments and displays those for the next two days in the tooltip. If you sit at your computer all day and work in the Chrome browser, you can hardly talk your way out of missing an appointment, especially since the extension also takes over warnings via the Windows notification system.

The pop-up’s interface is similar to the original at calendar.google.com, merely placing the sidebar under a hamburger menu to save space. It replicates the basic functionality of the original and there is little reason to visit the original Google website when using it.

But it also does a few things better than Google. For example, the pop-up offers the same view options as day, month, week, year and appointment overview, but calls the latter a list and adds an overview as known from the Calendar Android app. In addition, you can define your own view in the settings, for example, if you want to keep an eye on the next three days or six weeks. 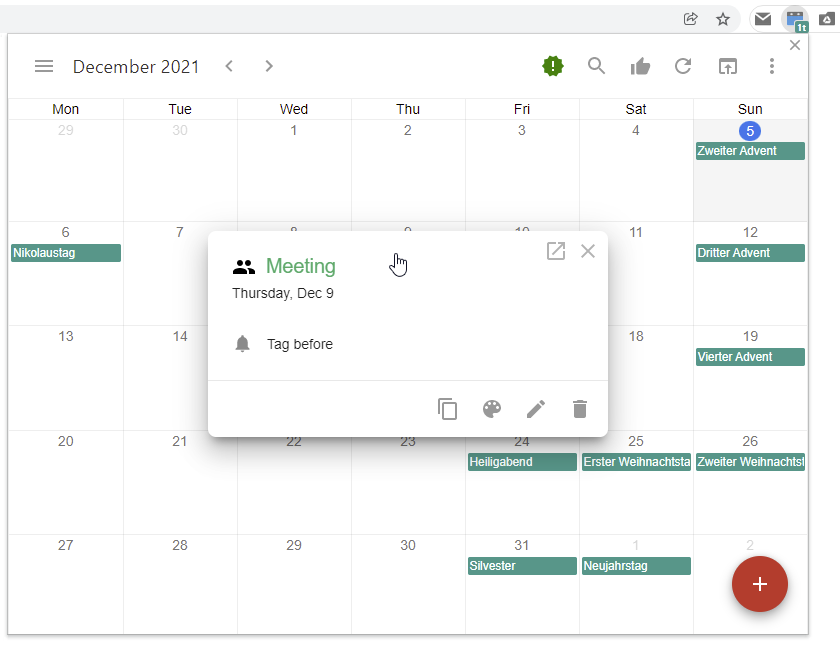 The current version v26.1.1 of Checker Plus for Google Calendar also has a lot of setting options, such as displaying the week numbers or marking the weekends. Particularly noteworthy here are the settings for notifications, which can be fine-tuned very well across multiple accounts and calendars.

The pop-up of the Drive extension is basically a copy of the Google interface at drive.google.com. It is limited to the list form and does without previews of the files, but also without advertisements, such as “Buy storage space”. It also has nowhere near as many options in the context menu of a folder or file as the original, but this can generally be gotten over because the most important options such as download, copy link, rename and remove are available. 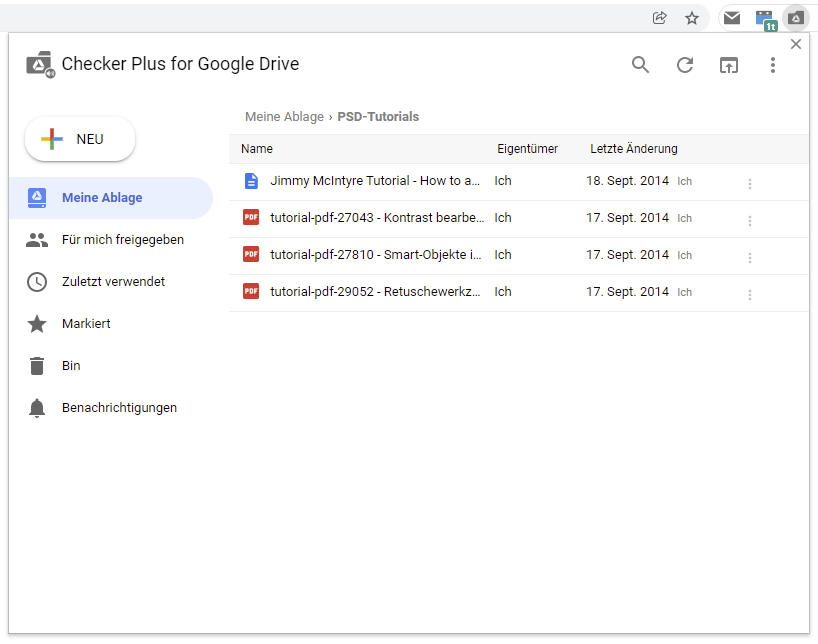 Few Chrome extensions are as close to the needs of users as the Checker Plus extensions. The functional scope of the Gmail extension in particular is simply impressive and leaves hardly anything to be desired.

Only when it comes to localising the source code in currently more than 30 languages, Savard could take a little more care. Sometimes a little English gets mixed into otherwise German interfaces, especially in the settings. But any developer who has ever tried to offer his tool in so many languages will forgive him, because he knows the amount of work involved.

Unfortunately, the settings area Skins and Themes is everything but generally understandable and no comparison to the otherwise good UX of the extensions. If you want to make the pop-up pretty with background images and other colours, you have to read up and understand Jason’s concept of individualising separate elements.

Since Jason Savard now works full time on his extensions, he is dependent on income to be generated from them. He has declared some settings, which he says he worked on for a long time, as “additional functions” that you get if you donate an amount of money to him once or monthly. A fair concept, especially since he guarantees daily updates and even a response time of five minutes in case of problems. Well ;) But it’s nice to see a developer who puts so much heart and soul into his work.

Tringula And The Beauty Of Mathematics

Triangula is a great tool for artfully breaking up images into polygons. Another tool also makes it possible to use them as website placeholders.

What works and what we still have to wait for

All tag plugins used for kiko.io available on Github